14 octobre 2014 If an Englishman’s home is his castle, pib-home.co.uk has just what you need to give it a more personal touch!

However, a look at the pib-home.co.uk website will show you a side to Scandinavian design that you probably haven’t seen up to now. Attention usually focuses on Swedish and Finnish creations, but Denmark is also home to an influential school of furniture design. Danish design differs from other northern European schools in an approach that is much-influenced by organic shapes and ‘warmer’ lines. 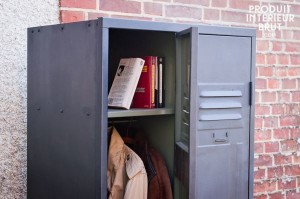 The contrast could hardly be greater between this vision of design and the more ‘industrial’ looks that can be seen at http://www.pib-home.co.uk/industrial/en/industrial-furniture-style.

Industrial furniture is defined as furniture that was originally produced for use in factories and workshops. The emphasis in this kind of furniture is obviously on strength and adaptability.

This style first came to wider public notice immediately after the end of the Second World War. Mass-produced designs, such as the storage cabinet we can see below, featured clean, simple lines. It is this simplicity that has brought industrial design back to centre stage again, this time in the 21st century home.